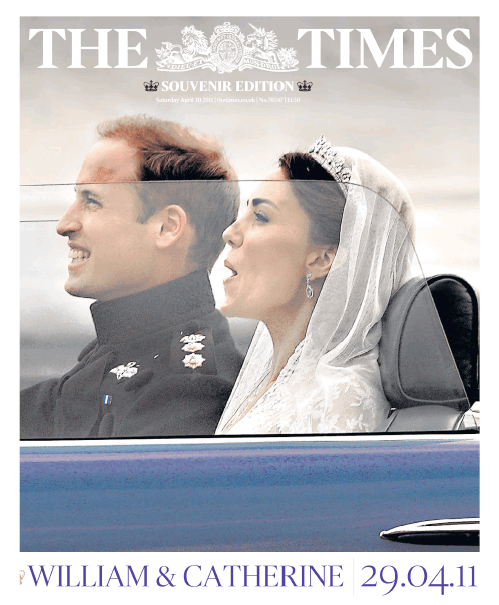 The Times approached Alterations Boutique to reproduce the Kate Middleton's Wedding dress on the day of the Royal Wedding.

"Women around the world could only dream of what it was like to walk down the aisle to marry a prince yesterday but The Times managed at least a semblance of how Kate Middleton must have felt - by re-creating That Dress within hours of its grand revelation. Even if the model (me) was not exactly a dead-ringer for our future Queen, Maria Blazquez, director of Alterations Boutique in Marylebone, was confident when agreeing late on Thursday night, to make a copy-cat Kate dress. I arrived at 10 am, still an hour before the best-kept wedding secret was revealed to the public. Ms Blazquez, her son Raul and a team of three dressmakers were expecting something more slinky, antique-themed, simple. But instead we got That Dress, a Sarah Burton design with a huge train, lots of lace, and large pleats. Lucie Konirova, one of the designers and dressmakers, started sketching furiously. Half of the team had already raced to a fabric shop in Shepherds Bush.

“Normally, if we are doing a wedding dress, we have about six weeks,” Lucie said. “I’m getting lost in all this skirt, said Lucie, swallowed under billows of satin by the sewing machine. By 5.45pm we are pretty much ready to go.‘It’s not difficult, you can have the most expensive dress in the world and you can make it. Even the Kate dress.” Ms Blazquez concluded. ‘There is always a difficult bit, you can start with that, but the rest is a piece of cake.” The Times replica wedding dress was made by Alterations Boutique, London.

"As soon as she was in the car, we started to identify what the lace was like and try to find as close a copy as possible," said Raul Echeverria, owner of Alterations Boutique in Marylebone. 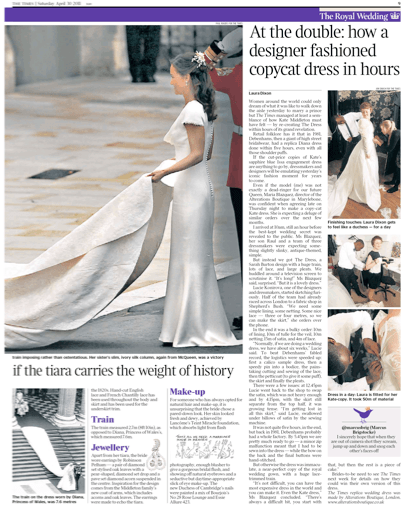 The challenge began when Alterations Boutique had a call from The Times newspaper late on Thursday 29th April, the day before the Royal Wedding. When Times journalist Laura Dixon approached us about making Kate Middleton's dress, we

Of course we accepted the challenge and the race was on! From the minute we saw the dress in its entirety, the race began to produce it and within 5 hours Alterations Boutique had it on display for all to see! did not have any idea what it would look like.

What was the reason behind this challenge?  Well, when Diana married Prince Charles in 1981, copies of her dress were in the shops within hours.